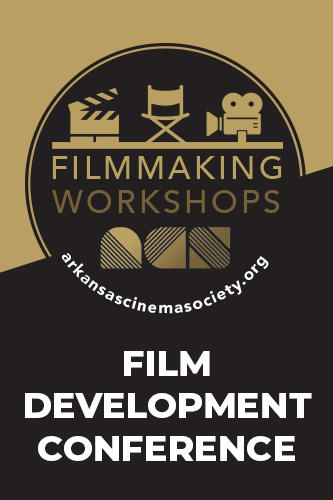 The Arkansas Cinema Society is excited to announce its first Film Development Conference on Friday, April 29th and Saturday, April 30th at Thaden School in Bentonville. Join us for evening screenings of Jockey and Loving, happy hours, and a full day of in-depth discussions and workshops on pre-production best practices with industry experts. We welcome filmmakers from across Arkansas, Oklahoma and Missouri to come learn from some of the best!

Hosted in person by ACS co-founder Jeff Nichols, this event will bring in Nichols’ producing partner Sarah Green and Jockey’s writer/producer Greg Kwedar and writer/director Clint Bentley. This Film Development Conference is made possible by support from John R. Tyson and Olivia Tyson.

ACS members receive 50% off tickets and passes and sponsor perks apply. A limited number of scholarships are available to those in need; click here to apply. ‍

All ticket holders to any event during the Arkansas Cinema Society’s Film Conference Weekend will be eligible to apply for a film development grant up to $2,500 awarded after the conference. Grant details will be released on the first day of the conference. This grant is made possible through the support of ACS board member Tom Gordon.

‍The doors open at 7:30 pm, film starts at 8. The film will be followed by a Q+A with the filmmakers. Watch the trailer for Jockey here.

‍Directed by Bentley and produced by Kwedar, Jockey premiered at the 2021 Sundance Film Festival and stars Clifton Collins Jr., Molly Parker and Moisés Arias. Jockey tells the story of an aging jockey who aims for a final championship, when a rookie rider arrives claiming to be his son.

‍Jockey premiered at the 2021 Sundance Film Festival. According to IndieWire, “Bentley’s feature debut is confidently assembled, with the world captured by cinematographer Adolpho Veloso seeming to exist entirely in that magic hour that casts ghostly rays of sunlight across the desert plain…”

‍Writer/director Jeff Nichols sits down with producer Sarah Green in a focused exploration of the top things to know about pre-production.Presentation by Sarah Green, Producer and Jeff Nichols, Writer and Director.

‍During any film or television production there are a variety of legal dos and don'ts that are vital to its success. Avoid common pitfalls with a primer on what film industry contracts and agreements are necessary to move into production. Join us for a discussion with New York-based attorney Matthew Rogers that will help you navigate the legalese of pre-production!

The Jockey Way: Reimagining How to Fund Indie Films‍

‍Listen in on a candid discussion from lead Jockey filmmakers as they discuss the innovative model for how they approached financing, the challenges they faced, and how they pulled it off. This panel discussion features Clint Bentley, writer, director, and producer; Greg Kwedar, writer and producer; and Jeff Nichols, writer and director.

‍What hurdles are you facing as a filmmaker in development or pre-production? What are the best tools to help overcome your obstacles? Participate in an intimate breakout session to get your personal questions answered and glean tactical insight from a working producer, director, or attorney on what it takes to successfully start production. Break Out Session is for pass holders only. This mentor breakout session features Clint Bentley, writer, director, and producer; Greg Kwedar, writer and producer; Jeff Nichols, writer and director; Sarah Green, producer; Mario Troncoso, producer; and Matt Rogers, lawyer.

‍The doors open at 7 p.m., film starts at 7:30. A Q+A with Jeff Nichols and Sarah Green will follow.Watch the trailer for Loving here.Directed by Jeff Nichols and produced by Sarah Green, Loving is the story of Richard (Joel Edgerton) and Mildred Loving (Ruth Negga), a couple whose arrest for interracial marriage in 1960s Virginia began a legal battle that would end with the Supreme Court's historic 1967 decision.

The film premiered at the 2016 Cannes Film Festival and competed for the Palme d’Ore. Negga and Edgerton were both nominated for Golden Globes for their performances.