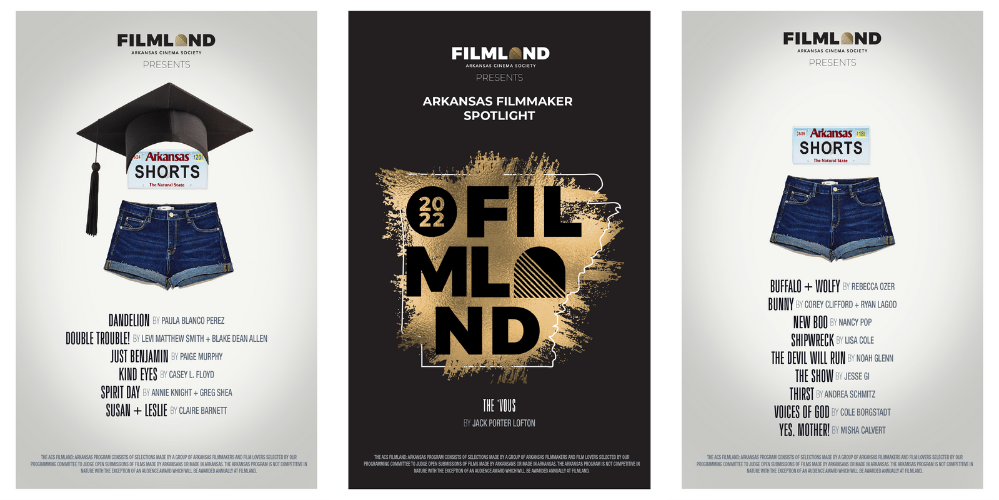 We are thrilled to announce the line-up for the fifth edition of Filmland: Arkansas. Each year, in addition to our curated program, Filmland: Arkansas highlights some of the best short and feature filmmakers in Arkansas and those connected to our beloved state. And 2022 will be no different!

We are so excited to have received a record number of submissions this year and that more and more Arkansans are making films. This year, 12 feature films and 65 short films were submitted. With so many submissions, we have decided to host Filmland: Arkansas in-person along with additional programming in our Filmland: Arkansas Digital Experience in order to showcase more of the incredible talent here in Arkansas. A full list of selections can be found on our website.

“Giving Arkansans a venue to screen their films has always been at the heart of the ACS mission and we are ecstatic about the record number of submissions and bringing Filmland: Arkansas back to a live and in-person movie theater this year,” said ACS Executive Director Kathryn Tucker. “While all of our programming has always been non-competitive in nature, we want to allow our audience the opportunity to support their favorite local filmmakers. So, we hope people come out to CALS Ron Robinson Theater November 3rd-6th to experience all of the incredible talent coming out of Arkansas and vote for the Audience Award.”

Audience members at the in-person screenings will have a chance to vote on the Audience Award for the Filmland: Arkansas Short Film and Student Short Film blocks. Votes will be tallied within minutes and a winner will be announced. We will host a Q+A with the filmmakers who win the Audience Award directly following each film block.

The 'Vous, a feature-length documentary by Jack Porter Lofton and Jeffrey Dailey about the famous Memphis BBQ restaurant, will screen in-person over the weekend as part of the Arkansas Filmmaker Spotlight Series.

The Filmland: Arkansas Digital Experience will feature more great films that our programming committee loved. Screening Nov. 3rd-17th via Eventive, our virtual screening platform, the Digital Experience will be broken up into four blocks–Student Shorts, Shorts, Outdoor Adventure Shorts and Features. You will have an ideal home viewing experience with native Apple TV, Roku, and Android TV apps as well as the option to screencast from computers and mobile devices. The Filmland: Arkansas Digital Experience is free with an ACS Membership or sponsorship. Individual tickets for shorts blocks and features will also be available for purchase a la carte. Tickets are $15 for each virtual block and $15 for each feature. Tickets will go on sale after the curated program is announced.

“Buffalo + Wolfy” (dir. Rebecca Ozer): During a fight about the state of their polyamorous relationship, two queer cavewomen start the first fire.

“Bunny” (dir. Corey Clifford + Ryan Lagod): A disheveled 40-year-old kids party performer hiding in the bathroom dressed as a bunny on Easter Sunday while kids pound on the door asking for candy, thinks he's hit his lowest point. Little does he know, that an interaction with an unhinged party guest will show him what rock bottom truly is. Based on a True Story.

“New Boo” (dir. Nancy Pop):  When Coral's girlfriends stop by to meet her new man, they struggle to accept her disturbing new views on dating.

“Shipwreck” (dir. Lisa Cole): "Shipwreck" is short narrative portrayal of a young girl coping with grief, loss and her sense of identity.

"The Blue Dress" (dir. Clayton Henderson): A young man and woman literally bump into each other at a bar and spend the evening getting to know one another.

“The Devil Will Run” (dir. Noah Glenn): A young boy is convinced that the Devil lives in a hole in his backyard. Can he find the courage to face down his fear?

“The Show” (dir. Jesse Gi):  Peter, a high school senior and equipment manager of the school baseball team, lures Henry, a rising star player, to a private batting session that leads to a violent altercation.

“Thirst” (dir. Andrea Schmitz): They said it was a new blend / With a dark strong zombie brew head / And the label on the table end said / “Never Sleep Again”

“Voices of God” (Cole Borgstadt):  The trajectories of two teenage boys on opposite sides of a death in their town and the outlets they look to for emotional stability in the aftermath.

“Yes, Mother!” (dir. Misha Calvert):  Two faithful cult wives discover a secret message from their beloved guru, but his instructions force them into a bizarre role play that eventually leads them into a frightening new land.

“Dandelion” (dir. Paula Blanco Perez):  An exploration of the effects of Alzheimer's through reflections and loss of the notion of time. This movie is for the director’s grandmother (yaya), who suffers from Alzheimer's dementia and passed away last March, 2022.

“Just Benjamin” (Dir. Paige Murphy): Benjamin “Benji” Davis, a 29-year-old transgender man from Arkansas, has wanted to move to Colorado for years. Since coming out as trans in his 20s, Benji has found acceptance in unexpected places, both in the military and with his traditional, small-town Arkansan father. But Benji hopes that moving to Colorado will be a fresh start for him, a place where he can be safe and free, where he can be "just Benjamin."

“Kind Eyes” (dir. Casey L. Floyd): Seeking romance on a dating app date and believing he’s finally found it, Cody looks up to see his promising date turn into something else entirely.

“Spirit Day” (dir. Annie Knight + Greg Shea):  “Spirit Day” follows Frankie, a lonely middle-schooler, as they pick a costume for their school's upcoming spirit day with the help of their imaginary friend, Mac. However, choosing an outfit proves more complicated than expected, prompting questions of presentation and identity.

“Susan + Leslie” (dir. Claire Barnett):  Susan and Leslie is a short documentary following a married couple from Arkansas with visual impairments as they prepare to go to the grocery store.

“Back to Bora Bora: (Dir. Dwight Jackson): An older couple, who are totally sick of each other, fantasize about what it will be like when the other is gone.

“Bienvenidos a Los Angeles” (dir. Lisa Cole):  Inspired by true events and shot on location at LAX airport, "Bienvenidos a Los Angeles" tells the timely story of Imani, a Nigerian single-mother living in Los Angeles, who offers to help a perfect stranger reunite with her son. In doing so, Imani learns this simple act of kindness threatens to jeopardize her own path to citizenship.

“Flight” (dir. Tyler Horne): A boy struggling to come to terms with his parent's marital problems must face his worst nightmare and make a choice he never wanted to make.

“Good Gorgeous Hell” (dir. Reed Cash Carson): A manic single father with a mysterious black eye desperately tries to win back the love of his 10 year old son on a delirious day in Arkansas. Based on the writer/director's real childhood.

“LALO” (dir. Timothy Barnett):  An undocumented immigrant turned vigilante seeks justice for those that can’t turn to the law, in a city divided by fear.

“SUNSCREEN” (dir. Edna Luise Biesold):  When Shelby and Mason get to the beach they realize that neither of them brought sunscreen. Who's to blame? - This film observes how accountability is handled in a crumbling relationship.

“The Molok” (dir. Sam Wilson): The Molok follows Micah, a young boy dealing with the grief of losing his father. When Micah's mother falls ill, he runs away, finding himself drawn to the wreckage of a fire-ravaged building. Inside an ancient creature has made its home, collecting and coveting the community's lost possessions, feeding off the memories they hold. The Molok makes Micah an offer: to rid him of all his painful memories. The cost? All of the good ones he has left.

“Uncle” (dir. Trenton Mynatt + Mary McDade): After escaping jail, Uncle and his nephew Orbre accidentally run over an Ol' Hag and steal her stuff. Turns out that was a terrible idea.

“Leo” (dir. Christopher Millham): Leo is a Hispanic folk country singer, who struggles to perform his art and maintain stability in his relationship without the presence of alcohol.

“Mae” (dir. Kristopher Pistole):  A troubled young musician returns to her home town and reflects on where she’s come from and ultimately must decide where she will go next.

“Moth” (dir. Claire Barnett):  A young women is visited by important woman in her life while laboring alone in a hospital elevator.

“My Dear God” (dir. Tara Sheffer): Searching for solace after claiming her sister's ashes, June Bell unearths the painful truth of her sister's overdose and finds the closure she didn't know she needed.

“Salad Days” (dir. Corbin Pitts):  After sudden life changes, a single father plunges into a deep state of depression while dragging his son down with him.

“Heal the River” (dir. Paulina Sobczak): Hydropower dams, built decades ago, have dramatically altered river systems across Alabama. Downstream of the Harris Dam on the Tallapoosa River, families and landowners who have lost property and use of the river have a once-in-a-generation opportunity to ask for changes to the operation of the dam through the relicensing process. Their hope is that changes can improve downstream conditions and begin to heal the river.

“Limits: The Story of ArkanSTOL” (dir. Zak Heald + Nicholas Wiench):  ArkanSTOL is a one-of-a-kind, uniquely challenging aerial competition that only the most skilled pilots are qualified to participate in. Testing pilots through a wide range of skills and demanding an intimate understanding of their plane, ArkanSTOL requires competitors to perform at the absolute top of their game. Pilots must thoroughly understand their own skill level as a pilot before attempting to qualify. For most pilots, flying at this event is an impossible challenge that requires years of experience. However, this year two young pilots, both 18, come to ArkanSTOL to try and make a name for themselves.

Follow Jared Jestice, the rookie trying to prove himself among his peers, and Jayden Newman, a piloting prodigy who is going for the win stolen from her the year before.

In their newest film, meet Dani Reyes-Acosta: a mountain athlete, land cultivator, and storyteller whose path consistently seeks the limits of her possibility. Ticking off climbs and ski lines across South America, cultivating her role as a legacy Coloradoan, and setting the course for the future of outdoor access in remote communities, Dani is a visceral example of how self-care and self-determination can harmonize via the outdoors.

The Send-off (dir. John-Michael Powell):  When Emmy Award winning actor, Dan Richards, throws an impromptu soirée at his Hollywood home with only his closest friends in attendance, a fun evening devolves into something much darker after Dan makes an unexpected announcement to the group.