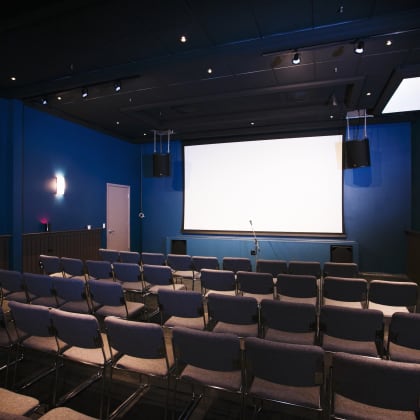 The Delta Silver Screen Film Fest will debut in Newport, Arkansas on June 4th and 5th as part of the 12th Annual Delta Arts Festival.  The Delta Arts Festival, working in partnership with the Arkansas Cinema Society, will be screening nine Arkansas related films in the Jane Parnell Performance Hall at 422 Front Street,Newport, Arkansas.  The films will celebrate the talents of Arkansas directors, actors, and screenwriters over the two-day period.

Another feature of the Delta Silver Screen Film Fest will be a Filmmaker’s Workshop conducted by accomplished Director James Cotten and Screenwriter and ProducerAmber Lindley.  They will share their insight into how to create and market your film.  Immediately after the workshop on Friday will be a screening of their feature film “The Painted Woman.”  Following the film both James and Amber will participate in a panel discussion of the film.

Friday, June 4th will be devoted to short films by Arkansas directors.  Films to be screened include “A Promising Voice,” by Obed Lamy of Fayetteville; “Becoming Riley Benton,” by Chase Hartsell of Hot Springs; “The Bench,” by Bronson Crabtree of Little Rock; "The Orderly" by Daniel Campbell of Little Rock; “Going Viral,” by Joshua Charperrin Woodard of Jonesboro; and “Pillow” by Joshua H. Miller and Miles B. Miller of Little Rock.  Following the short film screening several of the directors will be on hand for a panel discussion of their films.

Saturday, June the 5th will be reserved for feature-length films.  Men and Women of Distinction: Mike Beebe by director Kathryn Tucker of Little Rock will screen in the morning.  A wonderful Arkansas travel documentary, Make Room for Pie by director Larry Foley of Fayetteville and writer Kat Robinson of Little Rock will screen in the early afternoon. The Delta Silver Screen Film Fest’s final film will be Painted Woman by director James Cotten of Fort Smith/Los Angeles and screenwriter Amber Lindley of Springdale. The Fest will close with a panel discussion with directors and writers of the feature length films.

The Delta Silver Screen Film Fest is free to the public and free parking is available throughout downtown Newport.  This event is part of the Delta Arts Festival which, in addition to hosting film screenings, will also have over 200 visual artists, 35 authors, and 31 live music concerts during the two-day festival. Come celebrate the art of film and much more at the Delta Silver Screen Film Festival on June 4th and 5th.  Visit www.deltaartsfestival.com or call the Newport Area Chamber of Commerce at 870-523-1009 for more information.

10:00 am - Delta Silver Screen Film Fest Opens for the Day

10:10 am - Welcome to the Delta Silver Screen Film Fest by Host to Be Announced