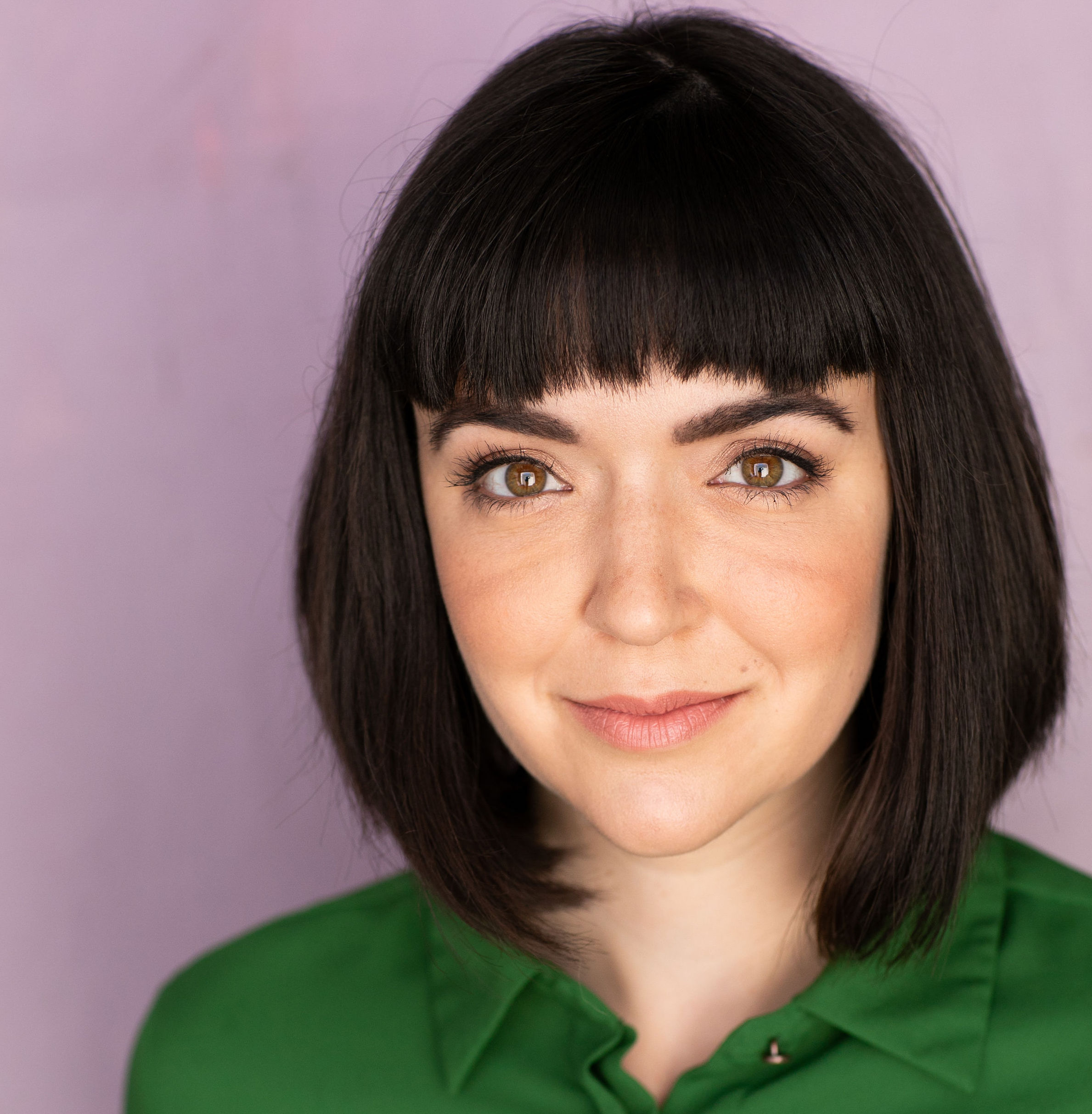 Actor Stephanie Bignault recently stepped behind the scenes as the co-producer of the short film “360 Seconds,” written & directed by Bex Bradshaw and starring Sydney Sainté about a character named Ladykiller. Stephanie is an alumnae of the University of Arkansas Acting MFA program and has been featured in TheatreSquared productions Shakespeare in Love (Viola/Thomas), Great Expectations (Estella) and Rapture Blister Burn (Avery). She also appeared in the original workshop production of Flamingo & Decatur (Nicole) at the Arkansas New Play Festival. Another year with the Arkansas New Play Fest, she participated in a staged reading of Disfarmer (Camille) both at TheatreSquared and Arkansas Repertory Theatre. Her TV/Film credits include Carol in Discovery ID's Betrayed (Season 4), Lora in The Riot Act, and Rose Leroy in the pilot episode of Class of Lies. She lives in Los Angeles.  You can watch “360 Seconds” here.

‍We spoke with Stephanie about her first venture into production.

So, you recently cut your teeth in production with “360 Seconds.” How did this come about?

When I first moved out here, I got a job as a nanny, which was really, really lovely and spoke to another skill set of mine and really gave me a little bit more freedom to be able to audition and stuff a little bit more of a flexible schedule. However, just a little over a year ago, I was like, I think it's time for a big change. I want to be surrounded. I want to work in a place where I'm going to meet other people that are wanting to make their own stuff—people are connected to the industry. I want to learn another side of this process other than acting. And it just so happened that my friend had connections to this production company, and they were looking for a new office manager type person.

And so I started working there just prior to lockdown. That was how I met Bex because she also works there [...] I help out with some of the scheduling for production, but I also will assist the production coordinator on staff as well as the head of production on staff with various to do so I really got immersed and, and seeing what it actually looks like on paper. And it's all a lot of paperwork [...] It was just making sure licensing, permits, talent—like just every aspect of it is covered. And that's what the production side of it really does. So Bex at one point over the Summer had written a feature script and she was like, “Hey, do you want to do an informal zoom reading of this script?”

I felt so honored that she had me read for the lead. It was so much fun. It was like this thriller. Her writing is amazing. And I just kept talking with her about it afterwards because I was so lit up from it. And then I'm coming back into the office and like late June, early July, you know, masked and stuff, we were seeing each other more and she was like, “I really want to make something.” [I said] “I really want to help you make it.” And so that's what really led to this—it was just finding this great collaborative person and just a natural chemistry that I feel like we've really bagged. So since we've been doing some of this press for “360 Seconds” and we're getting some really great feedback from it. This was always kind of the plan, but once we really released it, we were like, “okay, let's start ironing out what the feature version for this vigilante character would look like.” And so for the past few weeks, we meet up once a week and then we're messaging each other all the time as well. And we're breaking the story and we're putting together a pitch deck and an official treatment that we're hoping to be able to shop around places and see if we can find funding that we can make the thing in a full capacity, which we're very excited about.

Has “360 Seconds” been accepted to some festivals?

That was a big question for us, because we were like, okay, do we want to submit this to festivals this year? And ultimately, we decided that we wanted to get as big of an audience for it as possible and as many eyes on it as possible. So, we did not go with the festival route, especially since it was a weird year, last year. Especially because we shot this during lockdown, following like all the COVID protocols that LA has in place for filming, we just really wanted to build some momentum out of a time that felt so stagnant, you know, and rather than submitting it to East Michigan or something like random for a festival, which is always really cool. I think there's definitely a benefit to festivals, but for this particular project at this particular time, we felt like just getting it out would help us get maybe more press on it than we would necessarily get through doing the festival route. And I think we've really found that to be the case. We've been really pleased with the response that we've gotten and the number of publications that have featured us or given us a little review or posted about us on a website. It's been really great.

What was it like producing for the first time? Did you consult producers you knew, or did you just dive right in and kind of learn while you were on the ground?

Yeah, I just dove right in. I did ask questions to some folks here and there when things came up, but for the most part, I was just following my own instincts and just doing it and finding out what that experience really was first-hand hands-on and just diving in is always just so rewarding.

You talked about the COVID protocols and things like that. Were there other things that were maybe non-COVID related that popped up that you had to like troubleshoot?

We did a one day shoot, and we felt as ready as we possibly could have been. However, one thing that we did not think about were some of the backup SD cards. It's always the littlest things, right. We rented an Arri, which is like an incredible camera, and it looks that's part of the reason why our short looks so beautiful is because we used such nice equipment. But it was also our cinematographer’s first time using that camera. And unfortunately, we did not realize how long it was going to take to offload these SD cards and how quickly they would fill up. So thankfully, we had our PA on hands to run around to Best Buy and grab extra ones. So, it was a really small little hurdle to deal with. That and the Arri is a way heavier and more difficult to set up.

Then I think we were anticipating and, and in light of COVID, we wanted to keep it an incredibly skeletal team. So, it was just two guys—essentially our cinematographer and our gaffer that were setting up each shot. And I was the first A.D. on set, so every time that they were setting things up, it would struggle a little bit. I would try to jump in where they needed me following their instruction, but it did make it more difficult in such a small set that we built ourselves in the living room of Bex’s apartment. [I]t just took a lot longer than anticipated; however, because the script being what it was, we still ultimately had plenty of time to do all of the things that we were really hoping to do, although the technical logistics of some of these sweeping shots that we were hoping to get just didn't make sense because we didn't have the equipment to really achieve that result.

Because the camera was so heavy, we found a way around that. And what we landed on, I think was maybe even more creative and cooler than what we could have set ourselves up for. And that's the part of being really present in the moment and knowing, expecting, and looking for the problems and, and being excited to solve them. I think it is a big key to having a successful day on set and not bringing down the mood. You want to keep it up and energized so that we can just keep rolling through a 12-to-15 hour day if we need to.

What’s next for you—do you want to stay in production or keep acting, maybe both?

I want to do both, and I want to learn other areas as well. I just want to feel as well rounded in the craft as I can be. Probably not as much as like the technical stuff. I have written a handful of short scripts, and I'm working on some ideas for features as well. So I feel like this opportunity and this relationship that Be and I have found has just opened up the world of it in a way that I didn't see access to before. And really like getting connected with the team that you would like to have. And knowing that Craigslist is an incredible tool out here for finding people that are just like hungry and talented and fresh on the scene, or, or maybe just looking to switch it up entirely. [E]ven though we're all wanting to build a career, but in the beginning, it's not about how much money you're going to get paid to do the thing, it's about doing the thing and really getting in there and trying stuff and experimenting and seeing what happens and ultimately like a deep love for storytelling that just like brings everyone together and gets everyone really excited. I love it.

You can find it on Vimeo. You can also just go to Bexbradshaw.com and it's right there on her homepage of her website. But you can also just follow me on Instagram (@yoyo_benyo) and find a whole bunch of links all over the place.