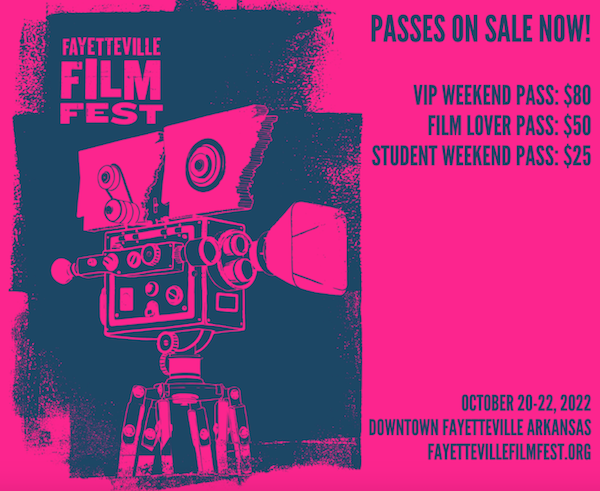 The Fayetteville Film Fest Board is excited to announce the fourteenth annual Fayetteville Film Fest to be held October 20-22, 2022. This year's festival schedule is packed with screenings of 70 films, including 4 feature length narrative films and 3 feature length documentaries and will feature discussions and Q&A sessions with visiting filmmakers.

This year marks the fifth annual Fayetteville Film Prize pitch contest. This exciting and unique competition includes a pitch event where contestants have 5 minutes to pitch their best film idea to a panel of judges. The winner of the FAYETTEVILLE FILM PRIZE will receive a cash prize of $2000 to enable them to execute their film. The winner will have 10 months to shoot their film in Northwest Arkansas and the finished film will screen at the 2023 Fayetteville Film Fest. To register to pitch for the Fayetteville Film Prize, filmmakers are encouraged to visit fayettevillefilmfest.org
‍

Nicholas Buggs and Cristopher Barkley of Bonzai Creative and the Make It Podcast will be special guests of the festival, educating Pitch Prize competitors on the art of packaging your project for investors and also serving as Pitch Prize jurors. Other events include a panel and reception for the Micheaux Award and Film Labs and one for Women in Film. The event will take place at the University of Arkansas Global Campus theater and the Pryor Center on Fayetteville’s historic town square.

Executive Director, Cassie Self, is excited to see the festival return to the fully in-person format this year: “Attending the festival is always a special experience because you get a chance to watch an incredible variety of films with a wide range of subjects and styles and you get to interact with the filmmakers to learn about their work.”

Passes and advance individual tickets for the 2022 Fayetteville Film Fest are on sale now at fayettevillefilmfest.org. Passes range from All-Access VIP Passes at $80, Movie Lover’s Pass at $50, Student passes at $25, individual tickets from $5 - $8 each. There will also be a free outdoor screening on Thursday night on the square and at the Fayetteville Public Library on Saturday the 22nd.
‍

A Run For More | Directed by Ray Whitehouse

The Sun Rises in the East | Directed by Tayo Giwa
‍

A Psychogeography of Mourning | Directed by Shayna Connelly

Baptized in the Flames | Directed by Ringo Jones

Call of the Clown Horn | Directed by Mike Stutz

Johnny Dynamite & The Bloodsuckers - The Last Ones | Directed by Jaxon Duron

One Hand on the Wheel | Directed by Barry Cobbs

The Sprayer | Directed by Farnoosh Abeo

The Stream | Directed by Samuel Dubin

For a Few Dollars Fewer | Directed by Nick Loper

The Bag | Directed by Sam Azghandi

The Misanthrope | Directed by Andy Kastelic

A Door Away | Directed by Alex H. Rafi

Limits: The Story of ArkanSTOL | Directed by Zak Heald and Nicholas Wiench

To The Bone | Directed by Andy Sarjahani