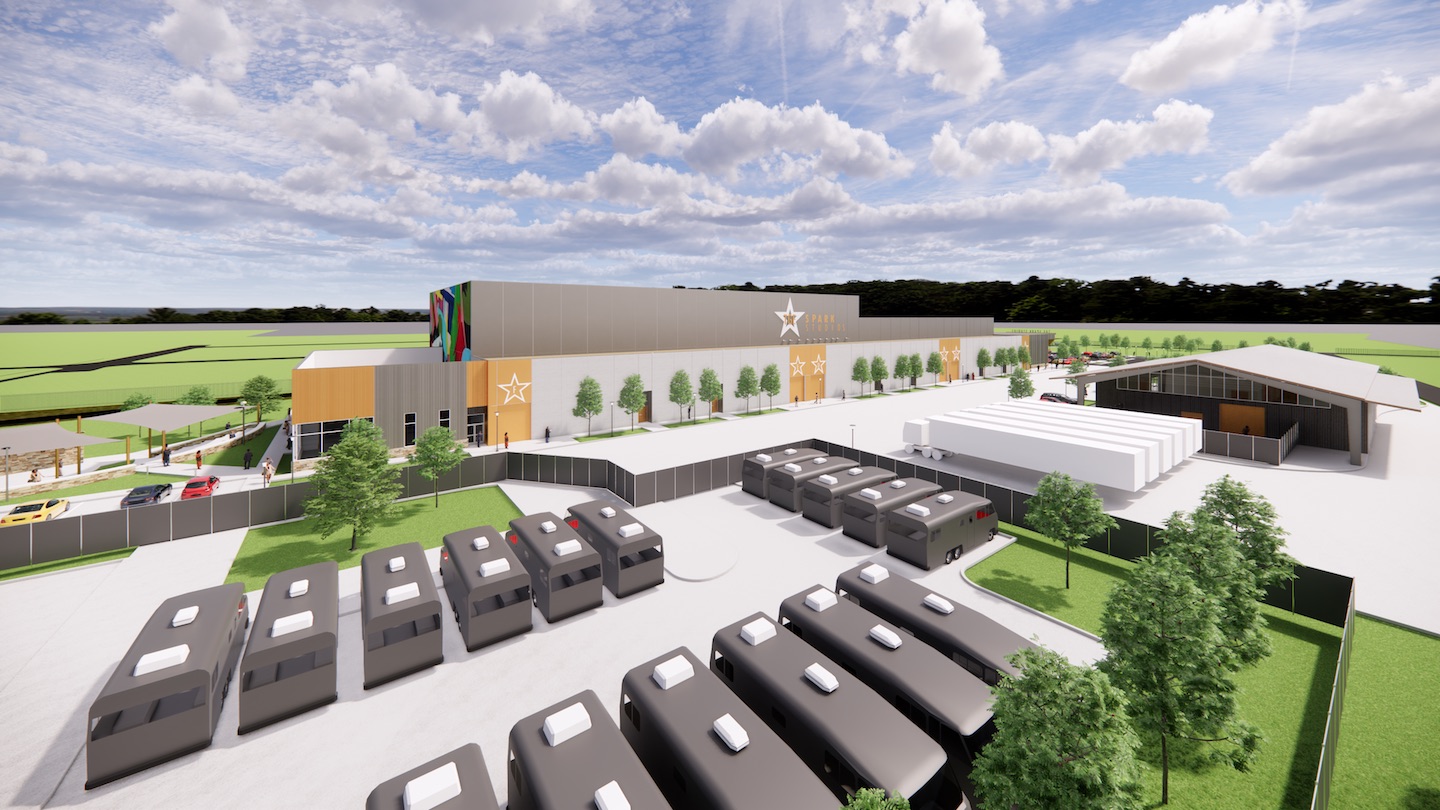 TGE Global Entertainment, Inc., has plans to build a 92,000-square-foot facility with 45,000-square-feet of film and television studio space at Chaffee Crossing in Fort Smith to support a burgeoning movie industry in Arkansas and Oklahoma. The Los Angeles-based entertainment company announced in November it has a film about legendary Deputy U.S. Marshal Bass Reeves under development as an authentic western with intentions to film most of it in the Fort Smith area.

The plans call for the facility to be named TGE Spark Studios, saidTGE Chief Financial Officer J. Michael Smith. “It’s our homage to a famous banker who built the New Theatre in downtown Fort Smith,” Smith said. “We want to follow in the footsteps of this giant who once also believed in Fort Smith as an entertainment hub for the region.”

The $30 million dollar project will primarily consist of new construction on approximately 20 acres bordered by Wintergreen Ave. andMahogany Ave. in the southeastern area of Chaffee Crossing. The Fort ChaffeeRedevelopment Authority (FCRA) has worked closely with TGE Inc. and architects in identifying potential multi-use trails from the studio location to the living, shopping, entertainment and dining areas in Chaffee Crossing.

Daniel Mann, Chief Executive Officer of FCRA, sees the project as fuel for further development on property adjacent to the studio and all acrossChaffee Crossing. “A film studio is a wonderful trigger to develop a creative ecosystem in our region. The name Spark Studio encapsulates the energy and even greater momentum we anticipate following this announcement,” said Mann.

Smith also noted the proposed facility at Chaffee Crossing would be the only one of its kind in a 550-mile radius, the closest being in NewOrleans, and could create an estimated $32 million annual economic impact on the Fort Smith community.

“The numbers are purposefully conservative as we are awaiting final projections, but that’s the preliminary estimate we’ve been operating from,”Smith said. “The economic purpose for a studio like Spark Studios is not just to house our projects, but projects from other production companies with a desire to film in Arkansas. And obviously we believe there are plenty of reasons to film in the Arkansas and Oklahoma region.”

The filmmaking studio is expected to create 100 to 150 direct jobs, according to TGE Inc. “Production crews that are involved with filmmaking have as much impact on tourism as they do on job creation,” Smith said. “When films come into a community to bring productions, the MPAA (Motion PictureAssociation of America) estimates the production will spend an average of$250,000 a day, paying 53% higher wages than the national average, They buy all kinds of materials to build sets and hiring people to procure and assemble the materials. They hire makeup artists. They hire hairdressers. They hire stylists, construction workers, electricians – to the tune of over 100 people a day - and use local caterers to feed the entire crew.”

Feature-length productions often have 200 to 250 people on set, many of them requiring local housing or long-term hotel rooms. “Advance production crews arrive from a few weeks to several months before a production starts to shoot,” Smith added.

Conceptual designs for the studio facility were led by Nate Deason and Galen Hunter, of Fort Smith-based MAHG Architecture, incorporating natural elements with a modern feel. “They have done a phenomenal job of combining the native stone, wood and natural textures that we asked to see as representative of the State and blended it with a modern technologically-advanced film studio,” Smith said.

Six sound stages account for about 45,000-square-feet of the project, with the tallest having a ceiling height of 45 feet. Additional features of the facility would include office spaces for film production teams, a screening room to review footage, editing suites and space for a “back lot” to have controlled outdoor filming. A cafeteria for on-site productions will be supplied by local catering companies. An amphitheater and event space are also part of the conceptual plans to provide an additional option for public gatherings in the Fort Smith area.

While most of the facility will be new construction, plans also call for restoration of four former Fort Chaffee officer’s quarters off Liberty Street to add 8,000-square-feet of film production offices on Mahogany Avenue, northwest from the production studio. ”Our intent is to preserve the historic Chaffee look using white siding with green rooflines. Additionally, we intend to name each building after officers of historical relevance who were stationed at Chaffee to bring some of that great history into our little corner of the development,” Smith said.

The 20-acre lot chosen for the filmmaking studio was shown to the TGE Inc. executive team with Board Chairman Robert Cross, CEO Giovanni Jackson, COO Keith Kaplan, CCO Robert C. Wilson and J. Michael Smith when they were welcomed to the inaugural Fort Smith International Film Festival as keynote speakers.

“The talent in this community is unbelievable,” CEO Jackson commented. “The friendly professionalism and can-do attitude are something people can expect from a state like Arkansas. But the talent we saw at the film festival was completely unexpected.”

“This area of the state has a legacy of producing men and women who believed they could, so they did. Sam Walton didn’t come from New York or L.A. And that’s just one on the list. There’s no reason Arkansas can’t be known for its contribution to entertainment, not after what we witnessed at the Fort Smith International Film Festival. It’s your opportunity, Arkansas. Let’s get it!” the executive challenged.