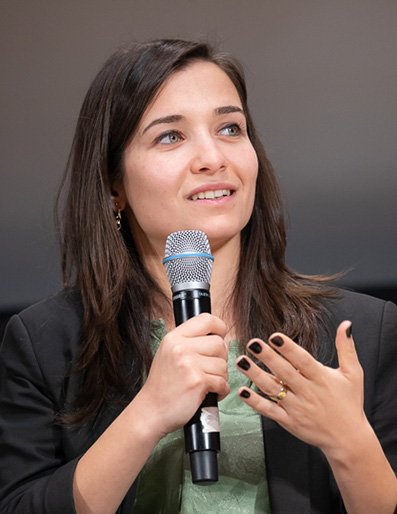 In 2009,18-year-old Waad al-Kateab moved to Aleppo to study marketing at the University of Aleppo.

In 2011, when protests against the Assad regime swept the country, Waad taught herself how to film and became a citizen journalist, determined to document the horrors of the war. During this time, Waad began reporting for Channel 4 News in the United Kingdom. The reports she made for Channel 4 News on the conflict inSyria, and the most complex humanitarian crisis in the world, became the most watched pieces on the UK news program me – and received almost half a billion views online and won 24 awards – including the 2016 International Emmy for breaking news coverage.

Waad documented her whole life over five years in Aleppo, as she falls in love with Hamza – her friend-turned-husband, a doctor – and gives birth to their first daughter, Sama ("Sky") in 2015, which became the basis of For Sama.

For Sama, directed with Edward Watts, won the Prix L'Œil d'or for best documentary at the 2019 Cannes FilmFestival, receiving a six-minute standing ovation. At the 73rd British Academy Film Awards, For Sama became the most nominated documentary in the history of the British Academy FilmAwards with four nominations, winning for Best Documentary. For Sama received anomination for Best Documentary Feature at the 2020 Academy Awards.

After fleeing Aleppo in December 2016, Waad, her husband, and their two daughters now reside in London, United Kingdom. Waad continues to work with Channel 4 and dedicates time to her advocacy campaign, Action For Sama, which focuses on raising awareness on the situation in Syria and seeks accountability for the war crimes committed there.